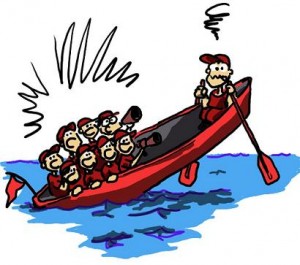 American Management in the Millenial Generation

An American automobile company and a Japanese auto company decided to have a competitive boat race on the Detroit River. Both teams trained long and hard to reach their peak performance.

On the big day, the Japanese team won by a mile.

Corporate management decided that the reason for the crushing defeat had to be found. A Continuous Measurable Improvement Team of “Executives” was set up to investigate the problem and to recommend appropriate corrective action.

Their conclusion: The problem was that the Japanese team had 8 people rowing and 1 person steering, whereas the American team had 1 person rowing and 8 people steering. The American Corporate Steering Committee immediately hired a consulting firm to do a study on the management structure.

They too advised that “too many people were steering and not enough rowing.”

It was called the “Rowing Team Quality First Program”, with meetings, dinners and free pens for the rower.  There was discussion of getting new paddles, canoes and other equipment, extra vacation days for practices and bonuses.

The next year the Japanese team won by two miles.

The American Corporation laid off the rower for poor performance, sold all of the paddles, cancelled all capital investments for new equipment, halted development of a new canoe, awarded high performance awards to the consulting firm and distributed the money saved as bonuses to the senior executives.

The next year’s racing team was outsourced to India.

Original is posted on businesscatalyst.com