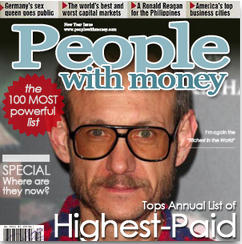 No one wants class, obviously.

Photographers, are you struggling?  Inundated by art-school-factories pumping out competition?  Exhausted by fee depreciation due to the competition?  Just can’t seem to see eye to eye with client?  Perhaps you have class in a world that doesn’t want any.

If you are not familiar with photographer Terry Richardson, you should be, you have most likely bought something because of his “work”.  “Uncle Terry” is the most sought-after photographer in the world by corporations such as H&M, CoverGirl Cosmetics, Marc Jacobs, Aldo, Tom Ford, Yves Saint Laurent, among others.  Magazines include GQ, Vogue, Harper’s Bazaar, i-D and Vanity Fair.  And an incredible list of high-profile celebrities and public figures, including Miley Cyrus, Kate Moss, Oprah, and President Obama.

According to People magazine, People with money, Terry Richardson is the highest paid photographer in the world.  With an estimated $58 million in combined earnings.  American Photographer e-zine has estimated Richardson’s total net worth to be in the neighborhood of $185 million boasting substantial property holdings, several restaurants (Fat Richardson Burger chain, a Football Team (New York Angels), a vodka brand (Pure Wonderichardson), a top-selling perfume (With Love from Terry) and a fashion line (Terry Richardson Seduction).

Like your clients, taste of your audience, the consumers of your work, must be taken into account.  Simple logic, what good is a Mona Lisa if it’s only regarded as a Mona Lisa to you?  Doesn’t matter your lenses, cameras, sets, studios, makeup artists, hair designers, wardrobe, lighting, crew, etc.  As Terry constantly demonstrates, it is about reflecting what the public wants as reality.

It is often said entertainment creations are suppose to be dreams, because reality is harsh, reality sucks.  Reminder, reality pays the likes of Terry Richardson to create your dreams.